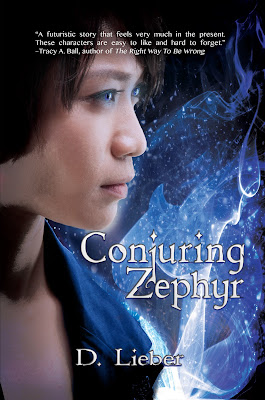 Retreating underground to escape a devastating ice age, humans build a new society. When magic is discovered and harnessed for survival, the citizens of Terrenus establish theories and principles of how to use it.

Kai Stephenson is determined to prove magical principles aren’t set in stone. Having lost her younger brother in a tragic accident, she will ensure such accidents never harm anyone else. She enrolls at the most elite university to gain the knowledge she needs to achieve her goal. Overconfident that living as a boy at an all-boys university will only be a minor inconvenience, Kai is convinced her classmates will never discover that she’s a woman. After all, women aren’t capable of higher forms of magic, and her boyish figure certainly doesn’t hurt her disguise.

Hiding her true identity becomes a problem when her new friends start to awaken her repressed sexuality.

When I exited the bathroom, Flynn had a hot cup of cocoa waiting for me. Handing me the cup, he wrapped me in a blanket and sat me down on a desk chair. He sat on the floor, leaning back against my legs. I sipped my cocoa and absently stroked his dark hair away from his forehead. The ends curled around my fingers like soft rings.

“Won’t the finishing school contact your family when you don’t show?”

“Patti told them I wasn’t coming. Like Capital University, it is publicly funded, so there isn’t tuition to send back. They will just think I changed my mind.”

He made a noise of acknowledgement. “Why did you choose Capital University and not a less conspicuous school?”

“Why did you?” I asked. “It’s the best, I knew I would find the information I need here, and Sei is an alumnus, so he could easily get me in.”

“Well, I’m glad you chose to come here,” he whispered.

We sat silently for a while. I continued to sip cocoa and stroke his hair. He laid his head back, looking at me upside-down. His brown eyes, usually sparkling with mischief, were intense and serious.

“I can’t imagine ever forgetting or ignoring you, Kai,” he whispered.

My hand stilled on his hair as he held me with his eyes. I put the cocoa on my desk, feeling too warm to finish it. Licking my lips, I whispered, “Thank you, Flynn.”

Tension built as our eyes remained locked. His gaze was strong and demanding. I bent my head toward him. No thoughts. No plan. No idea what I was doing. I sighed and my eyelids fluttered. 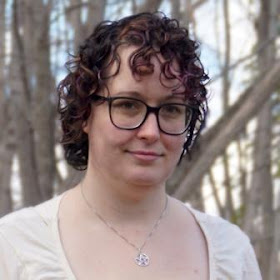 D. writes stories she wants to read. Her love of the worlds of fiction led her to earn a Bachelor’s in English from Wright State University.

When she isn’t reading or writing, she’s probably hiking, crafting, watching anime, Korean television or old movies. She may also be getting her geek on while planning her next steampunk cosplay with friends.

She lives in Wisconsin with her husband (John), retired guide dog (Samwise) and cat (Yin).

Where do you get inspiration for your stories?
I write stories I want to read, and I get inspiration from everywhere. Sometimes I have a dream, and sometimes an interesting idea just pops into my head. Most of the time, I will see a character archetype or meet a person and I ask: I wonder how a character like this would act in this situation? Or how would a character like this and a character like that get along? Other times, I start with world building and think of how different types of characters would deal with that world. Conjuring Zephyr was inspired by a common genre in Korean drama and anime where a female protagonist disguises herself as a male for some reason, and insanity ensues. I had that premise, and then I created a patriarchal magical society. She wouldn’t have to dress as a man unless it was a patriarchal society, and who doesn’t love magic. I threw in a little post-apocalypse, because I needed a reason why magic would be discovered and standardized for survival. Also, it’s fun. But the bottom line is, I wanted to see what kind of woman would do this and why. What kind of men would help her? Who would hinder her? Who would fall in love with her, and would she fall in love, too? I just wanted to know how the story ended.
How did you do research for your book?
Most of what could be classified as research for Conjuring Zephyr was about physics. I set up the rules to the world, and they needed to be consistent. If you change even one law of physics, all the others are affected. Some stuff I looked up on the Internet, other stuff I asked people who knew better than me. My younger brother, Zech, is studying physics, so I called him a few times. My husband, John, earned a bachelor’s of science and took physics classes. His pedantic personality helped ensure everything made sense. Human behavior is a huge part of making characters feel real, that all came from my own experiences and observations.
Do you have another profession besides writing?
I actually write and edit for a government magazine as my day job. While I’m sure the people in the field appreciate my articles for the information they provide, it’s not very exciting. Writing novels is my way of keeping my creativity alive.
If you could go back in time, where would you go?
That’s a tough choice. I love history, and I would love to see many time periods first-hand. However, I wouldn’t want to stay there. The time we live in now is wonderful, even with its many flaws. Medicine, technology, standards of living, and women’s and racial equality is at its highest (even if we still have a long way to go). It’s great to live in the 21st century. If I could go back in time, I would go to an ancient civilization, but just for a visit. Rome, Greece, Mesopotamia, Persia, China, there are so many to choose from! I want to know first-hand about the world prior to the spread of Christianity. Better yet, I would love to check out the Celts before Rome invaded, since they didn’t keep written records.
What is your next project?
I’m pretty excited about the project I’m working on now. I’m writing a gumshoe detective novel (fantasy romance, of course) set in an alternate 1920s. The premise is: due to the charlatans of the spiritualist movement, real witches reveal themselves to the world in the 1880s. They integrate into everyday society for a few decades, but fundamentalists are horrified. Instead of pushing for the prohibition of alcohol, they end up prohibiting magic in 1920. Witches can’t help being born magic, so the government prohibits them practicing magic in public or in front of humans. They also prohibit the manufacturing, selling, or transporting of magic-enhancing incense. The human protagonist, Anna Caill, is a private investigator hired by a witch to find his missing friend, the young high priest of a renowned coven.

D. Lieber will be awarding a handmade bookmark (International Giveaway) to a randomly drawn winner via rafflecopter during the tour.